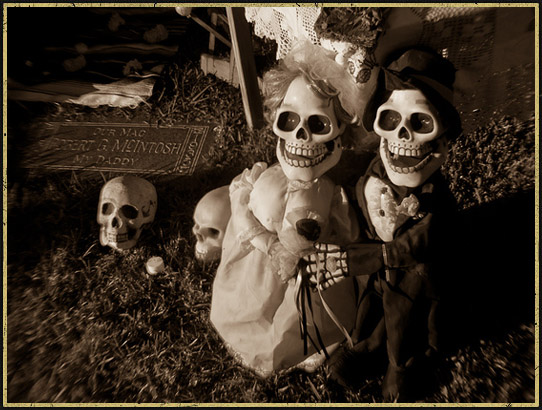 It seems this time around Angelenos are celebrating Halloween all month long. Here are all different types of activities to join in all the way til November:

The Echo’s Halloween Bash
The Echo’s free, yearly Halloween Bash is October 29th and features bands dressing as other musicians, with this year’s lineup including members of the classic punk band The Germs covering Iggy & the Stooges, and Manhattan Murder Mystery as Wesley Willis. 1822 Sunset Blvd., Los Angeles, 90026; 213.413.8200

Celebrates All Hallows Eve & Day of the Dead
La Cuevita will be featuring their Day of the Dead house made sugar skulls and crafts table so you can decorate a skull and Instagram your work @lacuevitabar. Best skulls will be chosen by November 3rd. Available now through November 2nd. Plus, “The Poison Affair” punch for $4 a drink during happy hour. Available from October 24th-November 2nd, from 7 – 9 pm. November 2, Day of the Dead Costume Party from 9 pm. Best costume winners announced at midnight. 5922 N Figueroa St., Los Angeles; 323.255.6871

LACMA’s Muse Costume Ball
Dress in your Halloween best and win in categories: Best Black-and-White Costume, Best Classic Movie Monster, and Best Ghost of Hollywood Past. Judges include costume designer, Judianna Makovsky (The Hunger Games, Harry Potter and the Sorcerer’s Stone), costume designer Julie Weiss (Hitchcock, American Beauty), and costume designer Daniel Orlandi (Saving Mr. Banks, Down With Love). Prizes include one year of Dual + Muse LACMA membership, two tickets to the 2014 Muse Costume Ball, a leather tote from BAGGU, a pair of orchestra tickets to closing night of Wait Until Dark at the Geffen Playhouse, a pair of tickets to Cirque du Soleil’s Totem at the Port of Los Angeles, a tote and a tee from the Johnson Hartig for Libertine Wear LACMA collection, and a gift certificate for use at any restaurant on the LACMA campus. Share your costume-making adventures and they will repost the best of the best on our social-media channels.Use hashtag #LACMACostumeBall; Tickets here.

Santa Monica Zombie Crawl
Dress in your best zombie garb for a bar crawl in the heart of Santa Monica, starting on the Santa Monica Pier. Makeup artists will be on-site at the starting location at Rusty’s Surf Ranch on the Pier, to assist with a great zombie look and an official zombie group photo will be under the Pier sign at 8 pm. Registration is from 6 – 9 pm at Rusty’s Surf Ranch on the Pier and participating bar include: Rusty’s Surf Ranch, Big Dean’s, Ye Old King’s Head, Barney’s Beanery, Brittania Pub, West 4th & Jane, and Wokcano. The official Zombie Crawl wristband will get you great food and drink specials along with $4 drafts, $5 wells and $5 shots all night, and entrance into the Official Zombie After Party at Wokcano on 5th street. Tickets: $10 in advance, $15 day of which includes a wristband for specials at participating bars.

Barsha Wines and Spirits’ Halloween party
This Hallo-wine event will showcase seasonal beers and wine club wines perfect for the Fall and Halloween. Participate in the costume contest and the winner will be announced at the end of the night and win a $200 gift basket! $15 (includes your first drink and light appetizers); October 24, 6-10 pm; 917 N. Sepulveda Blvd., Manhattan Beach, CA 90266; 310.318.9080

The 24th Annual “Boo at the Zoo”
“Boo at the Zoo” will take place over two weekends this year. Wear your wildest costumes and enjoy trick-or-treating throughout the Zoo. Additional activities include pumpkin carving demonstrations, arts and crafts, creepy-crawly animal encounters, chomp n’ stomp animal feedings, and interactive storytelling and music with Campfire Cathy. $18, $13 for children 2-12; $15 for seniors 62 and up, free for GLAZA members and children under two; October 19 and October 20, 10 am – 4 pm; October 26 and October 27, 10 am – 4 pm; Members’ preview: October 19 and October 27, 8:30 – 10 am.

First-ever “Night of the Living Zoo”
A one-of-a-kind, 21-and-over Halloween celebration, “Night of the Living Zoo” will transform the Zoo into a theater of mysterious and macabre delights: enjoy stunts of the Sideshow Sirens, DJ Johnny Hawkes spinning at the Tom Mankiewicz Conservation Carousel, and live musical performances by Batwings Catwings and Edgar Allan Poets, as well as a costume contest, fortune tellers, cocktails, and food trucks. $45/pre-sale general admissions, $40/members of GLAZA, $50/general admission at the door, $45/members at the door; October 25, 7 pm -12 am