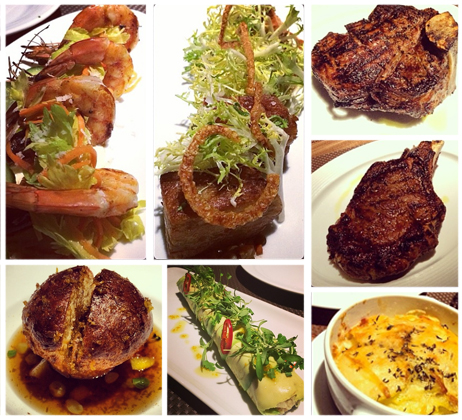 Chianina (5716 E Second St., Long Beach, 90803; 562.434.2333) is the newest restaurant by Long Beach’s Michael’s Restaurant Group and it opened this past weekend. The small, boutique, Italian steakhouse is named after the Chianina breed of cow that has more lean, tender meat than your typical steak. Chianina (pronounced KEY-A-KNEE-NA) beef is known for its commonly used in Italy, the white cattle are also larger than most breeds used in beef but lower in fat with 30% less cholesterol.

The design of the restaurant was created by Studio Unltd and Michael’s Restaurant Group, and was inspired by the de Stijl movement. The aesthetic seemed modern with a few rustic twists like the entrance formed by two large wine racks that can hold 300 labels and the small, plants placed on each table. The grey, white, and beige colors were inspired by the colors of the Chianina breed and the dim, intimate lighting and gave an overall warm, welcoming feeling.

As for the menu, everything was innovative, fresh, and had incredible flavor. We started out with Kauai Shrimp (some of the best shrimp I have ever had), Pork Belly that melted in your mouth, and Dungeness Crab that was so creative, it’s one of my most favorite dishes, ever. The Dungeness Crab was fresh and wrapped in avocado. It seemed as if it was a combination on a sushi roll and a burrito. Either way, it’s a must try!

For our main courses, we chose one steak from the Piedmontese Beef and one steak from the Prime Beef. Both were exceptional and cooked perfectly. The ordering of steaks allowed a choice of one of their three sauces: Béarnaise, Bordelaise, and Horseradish Creme Fraiche. The Bordelaise was the winner. It brought out earthy flavors in the steak without covering up the natural flavors. Not a beef lover? There are also options including lamb, ahi, chicken, and pastas like risotto, gnocchi bolognese, and linguini with clams. They have five different types of potatoes to chose from including Kennebec Frites, Russet Gnocchi, Mashed Russets, Baby Butterballs, and the Yukon Gratin, which is what we had and they did not disappoint. We also ordered the Cauliflower that had a lil zip from cayenne and the Brussels Sprouts with Pancetta, which were surprisingly light from the addition of lemon.

We fished our amazing meal off with a dessert of Baba. It was a light pastry sitting in a rum sauce, that came with a side cream. It was a beautiful ending to a beautiful meal.