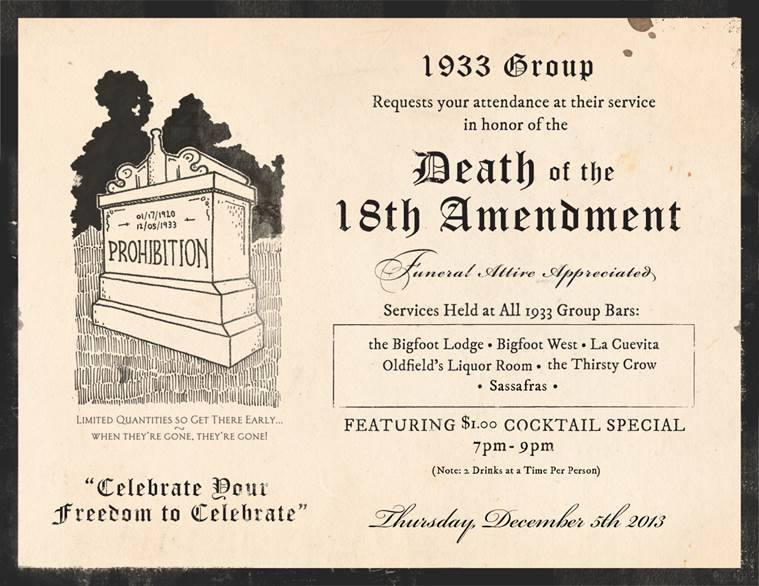 The end of the Prohibition Era 80 Years ago on December 5, 1933 means the return to the American tradition of craft fermentation/distillation, the beginning of the bartender as a staple in the culinary arts, and the enjoyment of alcohol as a social custom.

Del Monte Speakeasy
In honor of the 80th anniversary of the Repeal of Prohibition, this Venice bar will host the Brad Kay Jazz Band, their first Public Event Series, and an hour of $1 Prohibition-priced cocktails. The evening will also include a roasted pig, Prohibition side dishes, $5 Repeal Day punch all night long, and special Repeal Day cocktails for $9. 1930s attire isn’t required, but it is encouraged. December 5 9 pm; 52 Windward Ave., Los Angeles

Cole’s Red Car Bar
In honor of the 80th anniversary of the Repeal of Prohibition, Cole’s will host the Fifth Annual Jimmy Barella Bartending Competition. Enjoy $5 Old Overhault punch all evening while you watch some of LA’s top bartenders compete. Toast the end of Prohibition with an ice luge and make sure to check out what’s been called the best American cocktail bar, The Varnish, in the back of Cole’s. 1930s attire isn’t required, but it is encouraged. Thursday, 3 pm; 118 East 6th St., Los Angeles