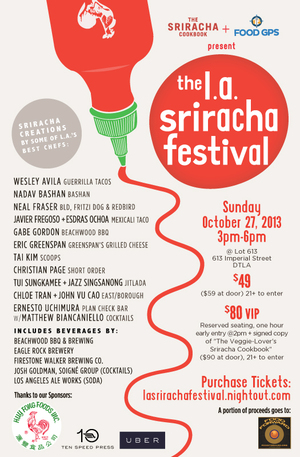 The 1st Annual L.A. Sriracha Festival is a chef-driven, all-inclusive event that is celebrating the famous hot sauce with Sriracha themed dishes, (even desserts). Local craft beer, cocktails, and sodas will help tame the heat.

Some of Los Angeles’ best chefs and restaurants participating in this year’s event include:

Huy Fong Foods, Inc. has come on board as a presenting sponsor and David Tran, founder of Huy Fong Foods and mastermind behind their Sriracha, will be making a special appearance. Uber is offering a free ride valued at up to $20 for first time users, and Ten Speed Press is giving a copy of The Veggie-Lover’s Sriracha Cookbook to all VIP guests.

A portion of proceeds will directly benefit Food Forward; a North Hollywood-based charity whose mission is to rescue and donate fresh local produce that would otherwise go to waste. Over 1.6 million pounds of food has been gleaned since 2009, which goes to local food pantries, helping feed over 40,000 hungry Southern Californians each month.